Temperance is an Old Energy Archetype from the Masonic Tarot Deck. In the Book of Slavery and Book of Power, the archetype is used to reinforce the idea that there should be a "balance" between good and evil. 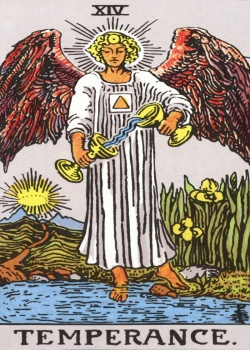 "This card expresses the production of any combination, the result of the action of the ascending or creative forces, and of the descending or destructive forces figured by the star of Solomon"[1]

"1. Combination of active and passive fluids. Entry of Spirit into Matter, and reaction of Matter upon the Spirit--" [2]

"The road especially signifies return. We have gone down into the self and now we are making our way back to involvement with the outer world, enriched."[4]

There are intimations of truth even in the esoteric tarot. For example, Case notes of the crown on the angel that it represents "union with the Supreme Spirit, the Goal of occult study and practice.[5] Unfortunately, case also intimates that this union is a task which requires lifetimes of effort. As he notes, the stream of water that "pours from cup to cup, is an emblem of a single life..." [6]