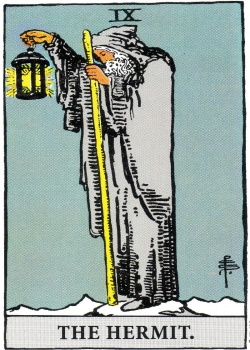 Constitutes the individual as an "eternal seeker" always on path of improvement. The Fool in School. "He is the eternal seeker, the Pilgrim soul."[3]

Sexism, God as male patriarch. "The Hermit is the Ancient One, the Source of all existence, above all things, yet supporting all. He precedes everything....the Absolute is the Father, or Progenitor, of all things.

Fool in school "Here is the Great Promise. In humanity are the potencies of Divinity, to be evolved by climbing the steeps of experience; and the end of the Path is union with our Source." [4]

". Primarily, the card means a withdrawal from the outer world for the purpose of activating the unconscious mind." [5]

" On the one hand it symbolizes a withdrawal from outer concerns. The person may physically remove himself, but this is not really necessary. What matters is the inner transfer of attention from 'getting and spending' as Wordsworth called our worldly activities, to a person's inner needs. It therefore requires an emotional with­drawal from other people and from activities once thought to be all-important. The card carries within it a sense of deliberate purpose, of withdrawing to work on self-development"[6]