Justice is an Old Energy Archetype from the Masonic Tarot Deck. In the Book of Slavery and Book of Power, the archetype is used to reinforce the idea that there should be a "balance" between good and evil. 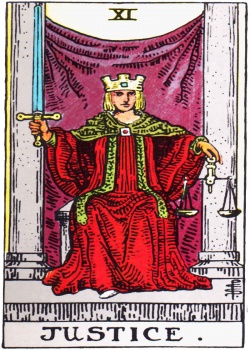 Balance between good and evil

While explaining the meaning of the tarot archetype Justice, Papus says "Here we find the continuation of the symbolism of the 2nd and 5th arcana. The Seated woman occupies the Centre between the columns, the first idea of the equilibrium between Good and Evil."[1]

Justice, as in, you get what you deserve.

Admonishment to work hard The ideology of work in capitalism. Find your place, work hard, and you will be rewarded.

"(Justice, the same law for everyone.) The 'Spirit Level' assures Equality before the Law of the work. Everything exists with the view only of performing a function. In the order of the universe everyone is bound to fulfil his task. We live in order to work, not to enjoy life without paying. Increases in salary reward the good 'workman' who by aiming at living better, benefits from the superior way of life to which he has risen."[2]

See Papus's comments about good and evil above.

See Wirth's comments about the importance of labour.

Fool in School/Excuse and Justification: "As long as we believe that our past lives just happen, that we do not bring our own selves into existence through everything we do, then the past remains a mystery, and the future an endlessly turning wheel, empty of meaning. But when we accept that every event in our lives has helped to form our characters, and that in the future we will continue to create ourselves through our actions, then the sword of wisdom cuts through the mystery."[3]

Judgment and Punishment: "This takes the concept of Justice beyond the Physical law and gives it the seal of Karmic evaluation as well. This shows that judgement and the law of cause and effect, better known by the name of karma, is all encompassing and all embracing. None escape its wrath, whether in this world or the next. As the last word, it is absolute."[4]

While speaking about fate, and everything happens for a reason, Pollock also speaks about action, taking responsibility, and guiding our own life and development through our actions.