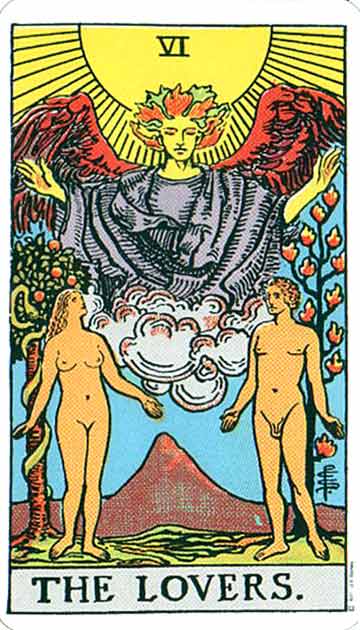 Binary Gender, Chosen One, Compliance and Submission, Excuse and Justification, Fool in School, Good versus Evil, Isolated Individuality, Judge and Punish/Reward, Only the Chosen, Secrets

Paul Foster Case uses the symbolism to describe a basic Freudian psychological dynamic, with intimations of connection to the "sun" of one's higher self.[1] In the processes he manages to perpetuate basic gender stereotypes (i.e. men rational, women unconscious irrational))

Initiation, choice, loyalty, testing: "The Lover, or the Initiate of the first degree undergoing the trial on which his increase in salary depends.) The learned man does what he wants, he chooses the direction which it suits him to follow. If in the full knowledge of the facts, he decides to dedicate himself to the Work of the Constructors, he will not be able to go back on his undertaking. The oath which he pronounces determines his future. Final commitment."[2]

BOP: Elitism. "The future of the young man depends upon the road which he chooses, whether he becomes one of the Initiates, the Mage of the 1st arcanum (the spiritual ו), or the rash thunder-stricken personage of the 16th arcanum (the ע)."[4]

Zoroastrian binary: ". The Lovers in the card represent a marriage of opposite forces, positive and negative, higher and lower" [5]

IN addition to efforts to make this card about relationships between a man and a women (binary gender), this also perpetuates Zoroastrian thinking. "Finally, the Lovers card encourages you to unify dual forces. You can bring together two parts that are seemingly in opposition to one another and create something that is ‘whole’, unified and harmonious. In every choice, there is an equal amount of advantage and disadvantage, opportunity and challenge, positive and negative. When you accept these dualities, you build the unity from which love flows." [6]

Sexist stereotypes: "The male figure in the card is the mind and rationality. The female figure is the heart and emotion."[7]

Sexist stereotypes: "It has been said of her that she is "the great feminine force controlling the very source of fife, gathering into herself all the energising forces and holding them in solution until the time of release."2 Therefore she is depicted sitting between the twin pillars of positive and negative power upon which the universe is founded, absorbing and unifying the opposing energies. She is the passive link between the physical and spiritual planes; through her, it is said, God can be realised in the heart of man, hence her title "The Indwelling Glory"." [8]

Fool in school: "The Lovers card may also be understood alongside key ideas from the philosopher and theologian Søren Kierkegaard: we face an existential choice between two life paths, either one willfully hedonistic or one grounded in our sense of ethical duty."[9]

Christian morality: "The philosophical component of the card centers around choice: there is duality or a decision to be made, and it is a choice between vice and virtue, an ethical quandary. The burning tree behind the man, with twelve glowing flames, is considered to be the Tree of Life, while the fruit-bearing tree behind the female is the Tree of Knowledge.30 Its fruits represent sexuality— fornication, desire, and temptation of the physical senses, which lead to human suffering.31 The Tree of Knowledge symbolizes the desire for sensation. Thus, the Tree of Knowledge represents the primordial choice: to eat of the fruit and know sexuality, thus knowing suffering, or to ascend up the Tree of Life toward God." [10]

Creation of INDEPENDENT INDIVIDUAL disconnected from family. "The Lovers symbolises the first decision which must be made unaided by the traveller on his journey through life. The youth is caught in the dilemma of having to choose between loyalty to his mother and desire for his beloved, between traditional authority and independent action. This is an important stage in the development of individuality; the stage at which the personality becomes an entity separate and apart from its origins." [11]

Pollack makes this about adolescent sexual drive and instincts, and also reproduces the classic binary gender schema, making it "progressive" by saying we all have elements of both genders within. [12]

"Therefore, the traditional version of trump 6 represents adoles­cence. Not only does sexuality emerge at this time but also intellectual and moral independence. Cards 3, 4 and 5 represented us as shaped by the great forces of nature, society, and parents. In card 6 the individual emerges, a true personality with its own ideas and purposes, able to make important choices based, not on parental orders, but on its own assessment of desires and responsibilities." [13]