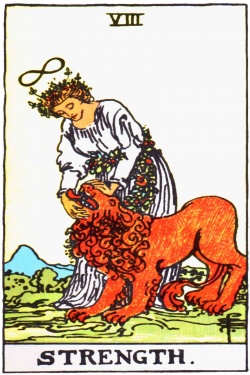 In the Book of Power, this refers to the prefered mode of control. Remembering that the Masonic Tarot marks the transition from Feudalism to Capitalism, this card admonishes the masters to adopt a new form of control, one where rule is not achieved with autocratic violence, but one where rule is achieved via alternative means.

As one commentator puts it "Be it through compassion, cunning, or understanding, Strength signifies true control of a situation, and not simply the power to forcefully impose your will."[2]

In addition to stipulating how control of others is to be achieved, this archetype also admonishes us to control our selves. Here we find elements of the Fool in School constellation, the notion that trials, testing, and tribulation built strength.

(the Strength; the brother who has become strong through mastering his own person.) Trial by Fire exteriorizes inner heat.[3]

Here, the fool is on a journey to "tame the dark side," a typical Zoroastrian theme.[4]

In psychological terms, this "dark side" is the unconsciousness, often shadow, which must be tamed and suppressed. As Pollack notes, "Now consider Strength.... The picture shows a woman taming a lion. Briefly, the image suggests the energy of the unconscious released and calmed, 'tamed' by the direction of con­scious understanding."[5] "passions conquered by reason." (p. 76).

Assumption that humans have a "dark side" which must be controlled by higher reason "This also represents the mastery of the lower by the higher. But in this case it is the soul which holds in check the passions, although her feet are still planted on earth, and the dark veil still floats about her head and clings around her."[6]

Subduing the self: "(Strength) maintains the balance between desire and will." [7]

"By making Strength number 8 we set it against the Chariot, as a different kind of power, not the ego's will, but the inner Strength to confront yourself calmly and without fear. The mysteries can be brought out because we have found the Strength to face them. The lion signifies all the feelings, fears, desires, and confusions sup­ pressed by the ego in its attempt to control life. The charioteer drew upon his inner feelings as a source of energy, but was always careful to direct that energy where he consciously decided it should go. Strength allows the inner passions to emerge, as the first step in going beyond the ego....On a deeper level the lion symbol­izes the whole force of personality, usually smoothed over by the demands of civilized life...This purpose can only be accomplished because the lion is 'tamed' at the same time that it is released.. [8]