The Chariot is an Old Energy Archetype from the Masonic Tarot Deck. In the Book of Slavery, the archetype is typically used to enforce notions of power, force, and rule over others. 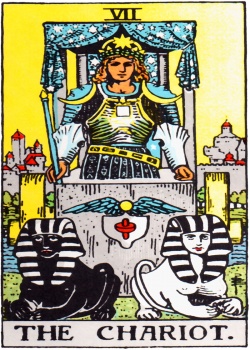 Will, will power, being in control, doing what needs to be done.

"Hieroglyphically the Zain expresses an arrow, and therefore it suggests the idea of a weapon, of the instrument which man uses to rule and conquer, and to attain his object."[1]

"A Conquerer, crowned with a coronet."[2]

"Man performing the function of God the Creator."[3]

"(The Chariot occupied by the Master assuming the direction of collective work.) The Initiate submits to the 'Set Square' which points to the master chosen to direct the work. The elected chief shows himself to be conciliating, sociable, always concerned with maintaining harmony. Out of the clash of warring opinions he can draw the conclusion which reveals impartially that part of truth which is implicit in these opinions.

"Through the myth's images we learn that spiritual victory over evil comes when we can focus all of nature, as well as the unconscious energy embodied in Shiva himself, through the conscious will."[5]

"Seen this way the Chariot shows us the developed ego; the lessons of the early cards have been absorbed, the adolescent period of searching and self­ creation has been passed, and now we see the mature adult, successful in life, admired by others, confident and content with himself, able to control feelings, and above all, to direct the will....His power is subordinate to his will. His hands hold no reins. His strong character alone controls the opposing forces in life."[6]