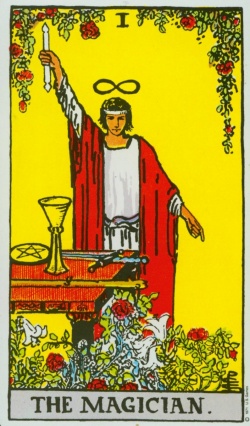 The first cause is therefore a Magician, but as this first cause is reflected in everything that is active, the opening character of the Tarot corresponds, in a general way, to every principle of activity. In the Universe he is God, seen as the great suggestive power of all that is accomplished in the Cosmos; in man he is the seat of individual initiative, the centre of perception, of conscience and of will power.[1]. Note the inappropriate and sexist association of form/formation with the female gender.

BOP: The magician must undergo the "test of the Elements" in order to prove his worth.[2]

The goal is to demonstrate loyalty and follow authority as it flows top down: "Tested by Fire, the Initiated obtains at last the emblem of supreme command, the Wand, the king's sceptre for he reigns through his own will merged with the sovereign will."[3]

"Where Isis is the Cosmic Mother, associated with the moon and with divine secrets, this is De meter, the Earth Mother, symbolizing the nourishing fruitfulness and thousand delights of earth. She is all-loving, radiant, universal female­ ness. In the Aquarian deck she becomes the Feeler, who stands with anus stretched out to embrace, her golden hair encircling naked breasts. She is called “prime mover,” and it is indeed emotions that stimulate us to movement and activity. The Sign of Cancer, a watery, emotional, maternal sign, is over her head linking her back again to the moon goddess, sea mother."[6]