The Book of Great Decease 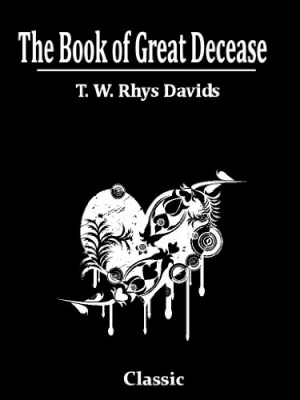 The sutta is organized into six chapters, with a "notions" section in the middle.

Chapter one is an Alignment Manual, aimed directly at Buddhist mendicants. It gives several "Conditions of Welfare," which is advice on what to do, and what to avoid in order to stay healthy, connected, and on path. It includes advice to stay true to the teachings, be respectful of elders, stay safe and cocooned, avoid being friends, companions, and intimate with "sinners" (i.e. the sick and disconnected), avoid business, avoid idle talk, avoid addictions, avoid sloth, avoid "society," avoid desires that lead to disjuncture (i.e. "sin"). It also contains advice to be modest, faithful, wise, and strong, to seek truth and peace, be earnest in contemplation, be kind in action, speech, and thought, surround themselves with "saints" (i.e. people who healthy and fully connected),

The chapter also includes a warning to the "sinful," i.e. those who act out of alignment, i.e. those who lack rectitude (another word for alignment) on the long term consequences of their bad behaviour. Interestingly, these do not include suggestions that will "go to hell," or be excluded from participation in spiritual realities. These are simply consequences, like poverty that arises from sloth, ill repute, ostracization, and general anxiety, which on the LP we'd refer to as one of the Steering Emotions that indicate Disjuncture.

Chapter Two is a Connection Manual. It provides guidance on how to make strong and permanent Connection so that you don't have to be constantly 'reborn.' Here, I see "rebirth" as entry into Normal Consciousness after having experienced a powerful Connection Event. You are "brought down" by all the toxicity and crap in the world around you. In order to avoid this "rebirth" into normal consciousness, we must rise above the toxicity that surrounds us. We must detach from the world as it is. In Buddhism, this guidance involves understanding and applying the Four Noble Truths, which are 1) that attachment to impermanent things is unsatisfying, 2) that if you crave these things you'll never be satisfied, 3) that only by giving up your attachment to impermanent things can you hope to be happy, healthy, satisfied, and connected, and that the way to do that is to follow the Eightfold Path

In this chapter Tathagata points out that one is only able to complete the process only when one is completely detached from people, when "lust, hatred, and delusion" have been reduced to nothing, when the person is thoughtful and mindful, and when they engage (as noted above) in the eighfold Right Action of the Eightfold Path.

In this chapter, Buddha references the Four Stages of enlightenment, noting the requirements that must be present at each stage.

Chapter Three is a Book of Magic. In this chapter, Buddha provides guidance on gaining greater control over the material world, so much so that the individual has a certain power over even death. Teleportation is also noted.

Continues the discussion initiated in Chapter Three, but with considerable brevity and focus.

Chapter four is a Discernment Manual. It provides advice on how to tell false teachings from true. The advice comes down to "compare it to Buddhist scripture" and against the teachings of an authentic order. If they don't align, then it doesn't matter who is saying it (brother, elder, etc.), "...this is not the word of the Blessed One, and has been wrongly grasped by that brother."[1]

This chapter also contains some references to Tathaga's Power over the Material World, his ability to clarify water, his ability to stay calm, and an apparent power of Transfiguration.

'It is even so, Ananda. Ananda, there: are two occasions on which the colour of the skin of a Tathagata becomes clear and exceeding bright. What are the two?'[2]

Chapter five contains statements designed to prop up the status of Tathagata and his teachings. It is proper to honour, revere, and venerate the Tathagata. At one point, Tathagatha gets annoyed at a fellow by the name of UPavana who "gets in the way" of people trying to see him. It is proper to build monuments to the birthplace, the place of "perfect insight," the point where Tathagata steps onto/into, or sets down the "Kingdom of Righteousness, and finally, the place where he expires.

Few and far between are the Tathagatas, the Arahat Buddhas who appear in the world: and now today, in the last watch of the night, the death of a Tathagata will take place; and this eminent brother stands in front of the Tathagata, concealing him, and in his last hour we are prevented from beholding the Tathagata;"[3]

Some concluding remarks, the impact of Buddha's death on his followers, the people, etc. The details of his illustrious funeral, the petty bickering over his possessions, the final peaceful resolution and distribution of his goods.