The Moon is an Old Energy Archetype from the Masonic Tarot Deck. In the Book of Slavery and Book of Power, the archetype is used to reinforce the idea that we are fallen fools in school. 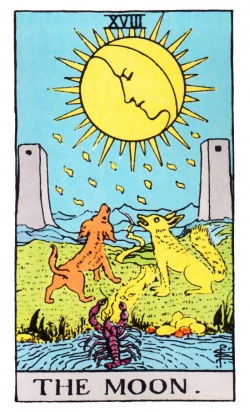 THE FALL "We have now traversed the steps which the spirit descends in its gradual and utter fall towards the material world. All is now ended; the spirit is completely materialized, and the change is indicated by the eighteenth card."[1]

"It symbolizes Twilight, Deception, and Error."[2]

View of human nature -> an animal inside that needs to tamed: "The dog and the wolf represent the 'animal self' roused by the Moon...we go beyond this 'super ego' repression; in the process the 'id' wildness comes to the surface...Here no such direction is given; as we come back from the Star the beast returns in all its wildness"[3]

Fool in School: "These symbols show that as you travel the highway to higher consciousness (the path heading to the distant mountains), you must evolve through all states of consciousness--nothing can be skipped."[4]

Fool in School: "The symbolism of the Moon suggests the beliefs of the heretical Cathari, who taught that after death the souls of the perfect are drawn up to celestial bliss whilst lesser men are reincarnated in animal form....The Star has shown the hero that the end is almost in sight, but now he must journey towards the dawn along a path which is badly lit and hard to discern. " [5]

Isolated individual "Now he has reached this state once more. Nothing belongs to him personally, but he himself does not belong to anybody either. He is free of all that has stood in the way of his freedom, just as we shall be free in death. He leaves everything behind and follows in the footsteps of the spiritual titans who have preceded him on this path to resurrection, to eternity. "[6]