The World (old energy version) is an Old Energy Archetype from the Masonic Tarot Deck. In the Book of Slavery and Book of Power, the archetype is used to reinforce the idea that 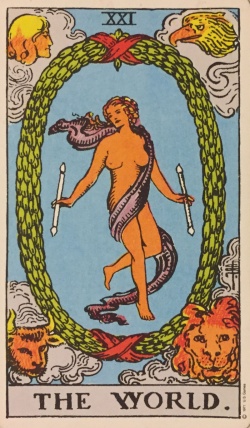 In this BOS, this archetype signifies "completion," graduation, completion of the work of inserting yourself into hierarchies of power and privilege.

"(The World; complete Initiation.) The Temple is constructed, it is complete and nothing is missing. The building is perfect in its design and in its execution. The ideal is attained, the Great Work accomplished, the Divine rule of Love and intelligence is established in the regenerated World."[1] Brainwashing complete. Initiate fully formed and compliant. Successful graduation to the next level. Note the idea of regeneration after a fall applied to the world.

Papus uses the card to add authority to the tarot itself. [2]

The culmination of the Fool's journey. "The World card represents the final state of cosmic consciousness, the supreme balance between good and evil, a complete reconciliation of the universe’s dichotomy and duality..."[3]

In the BOS, the work is never complete. You've had some success, you've been rewarded, but keep grinding it out at the wheel. "The wreath is circular, symbolising a continual cycle of successful completion and new beginnings because, as the woman steps through the wreath, she is completing one phase but beginning another one almost straight away."[4]

Fool in School. "And so we return to the Fool. Innocence and emptiness, united with wisdom. "[5]

Fool in School. "The four figures represent the four fixed signs of the Zodiac—Leo, Taurus, Aquarius, and Scorpio. They are symbolic of the four elements, the four suits of the Tarot, four compass points, four seasons, and the four corners of the Universe. They are here to guide you from one phase to the next, bringing balance and harmony to your journey."[6]

Zoroastrian themes: "The theme of Key 21: The World card is fulfillment, completion, and triumph in all undertakings. It is considered the best card in the tarot deck because it represents the Seeker’s oneness with his or her greater calling. The World card represents the final state of cosmic consciousness, the supreme balance between good and evil, a complete reconciliation of the universe’s dichotomy and duality, which was a persistent theme throughout the earlier cards of the Major Arcana." [7]

Completion of the Fool's journey. "Thus it is a symbol of salvation from death, and of eternal life. As representing a signature, this letter implies security, guaranty, pledge, and so on. A signature is what makes all business instruments valid. It therefore indicates the final seal and witness to the completion of the Great Work of liberation."[8]

Compliance and submission: "Dominion and Slavery is the pair of opposites attributed to Tau. Right interpretation of the ne- cessity for limitation in any form of manifested existence is the secret of dominion. Wrong in- terpretations of the same thing are the causes of our slavery to conditions. The clue to the right understanding is the aphorism, "He who would rule Nature must first obey her laws."[9]

Authentic spiritual wisdom: "The dancer represents the merging of self- consciousness with subconsciousness, and the blending of these two with superconsciousness. Occult tradition says that the scarf conceals the fact of male reproductive organs. In this high- est of all conscious experience all sense of separate sex is lost, along with the blotting out of the sense of separate personality....This card signifies Cosmic Consciousness, or Nirvana."[10]

Fool in school, completion: "Now look again at the four card pattern. See how the Fool splits into the Magician and the High Priestess, who must be brought back together again to form the World. The two cards represent the splitting up of the Fool's innocence into the illusion of opposites. The World shows us a restored unity, but a higher and deeper unity achieved through the growth outlined in the other eighteen cards. The fool is innocence, but the World is wisdom."[11]

"Once we lose that innocence, however, we cannot simply climb back to the level of the Fool. Instead, we must struggle and learn, through maturity, self-discovery, and spiri­ tual awareness, until we reach the greater freedom of the World."[12]

Fool in school triumphant: "Key 21 is a number of honour, truth, success and advancement. A number of the Universe-the crown of the Magi which is only gained after his many tests, trials and ordeals leading ultimately to victory. Therefore, we have the threshold of a new world. This is the end and the beginning. "[13]

Fool in School: "The upright World is a sign that you are nearing the end of your journey and that you will triumph." [14]

"To greater or lesser degree it indicates a unification of the person's inner sense of being with his or her outer activities. "[15]

"The World is about the command of growth energy, emotions, ambitions, and material goals—in other words, all four elemental suits. It is the card of synthesis. In a reading, the card indicates that the Seeker has the potential for great triumph and attainment of the highest level of cosmic consciousness. It suggests the Seeker’s importance in the greater cosmic landscape. Rewards and greatness are to come for the Seeker."[16]