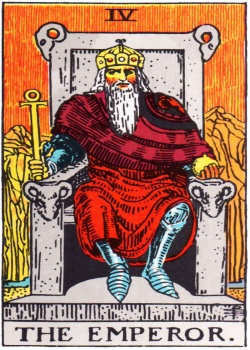 BOP: "From the ethereal heights of the ideal, the constructive aspirant is thrown headlong into the land of action. (The test of the first symbolic journey.) It is the battlefield of life. Here swords cross. But the aspiring Initiate does not involve himself in the pointless battles of opinions and sides: he reserves his energy in order to be able to apply it in the shaping of the 'Cubic Stone'."[1]

"The Emperor is the consort of the Empress. He too represents creation, but the creation of the will, not the feelings. He symbolises power rather than love."[3]

Association of the masculine "principles": with divine authority. "The helmet indicates the rule of the Divine Will in the Universe, and its universal action in the creation of Life (eagle)."[4]

Also law and order. Law versus chaos. "Any other approach can only destroy society. Today, we see this viewpoint embodied in an abstraction we call the 'system' . The Romans saw it more concretely in the personal figure of the Emperor, whom they described as the father of all his people."[5]

Active/Yang/Positive/Masculine reinforcement of stereotypes: "The man indicates the active; his position, however, shows that this activity is engendered by a superior term. The 1st arcanum, the Juggler, the active absolute, was represented standing, looking to the front; the 4th arcanum, active relative, is seated in profile." [6]

"Trumps 3 and 4 of the Tarot represent the parents in their arche­typal roles. But just as the Empress signified the natural world, so the Emperor carries the wider significance of the social world 'mar­ried' to nature. He symbolizes the laws of society, both good and bad, and the power that enforces them."[7]

"In readings the Emperor indicates (following the Rider pack image) the power of society, its laws and especially its authority to enforce those laws."[8]

"The card represents active yang force. The Emperor is the domination of the mind over the heart. Structure and regulation are pertinent themes."[9]

"Traditionally, if the card appears in a man’s reading, it indicates self-mastery and virile power, and in a woman’s, a father figure. The modern, more gender-neutral approach is to interpret it as dominance and superiority in the work, career, and business realms. When the Emperor card appears, themes of order, authority, and jurisdiction will be at play."[10]