The Hierophant is an Old Energy Archetype from the Masonic Tarot Deck. In the Book of Slavery, the archetype is typically used to reinforce elitism, and the idea that the secrets of power can only be shown to those properly formed through initiation. 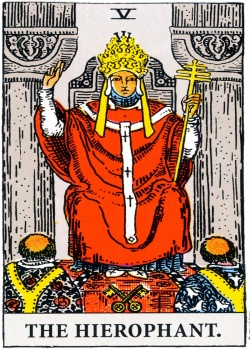 The Hierophant is the "revealer of mysteries." [1]

An authority figure who teachers the worthy aspirant: "(The Pope, the supreme holder of the knowledge of the Initiated.) Without complete theoretical instruction no one can tackle the effective practice of the 'Royal Art'. To pass a 'Brother' one must be practised in the handling of tools and be ignorant of nothing in the rules of architecture. The 'workman' who has reached the light perceives the Brilliant Star and knows the significance of the letter G, for geometry must be familiar to him." [2]

"The same idea of Esoterism, of secret Instruction, reappears; but the Tuition is now practical and oral, it no longer requires a book (third idea)."[3]

"Waite describes his card as symbolizing the 'outer way' of churches and dogma. But his use of the mystery term suggests another interpretation, one more favoured by those who see the Tarot as a secret doctrine of occult practices rather than a more general embodiment of human pat­terns. This interpretation is dramatically portrayed in the picture of the Hierophant from Aleister Crowley's Book of Thoth, drawn by Frieda Harris. Here the trump signifies initiation into a secret doc­trine, "[4]

Submit and follow the spiritual authorities. This is obvious from the symbolism of the cards, and the submission of two figures at the foot of the authority figure. This is echoed in Pollack, who seems to miss the obvious symbolism of submission.

"The Hierophant card suggests conformity as a prevailing impulse. To conform, one must repress certain aspects of oneself that are different from others....The Hierophant is a holy man, an important figure in his society, the interpreter of sacred mysteries. People rely on him to be a channel between heaven and earth. In a reading, the card typically indicates a desire to follow conventions and norms, a traditionalist—one who holds traditional values."[5]

Pollack speaks of initiation as a means towards union." [7]