From The SpiritWiki
Jump to: navigation, search

The Hierarchy of Basic Needs (a.k.a. Hierarchy of Needs) is a psychological representation of human needs proposed by Abraham Maslow in a 1943 paper entitled "A Theory of Human Motivation" (Maslow, 1943). It represents, according to Maslow, the "fundamental needs"[1] that every human organism has.

"'There is a hierarchy of five sets of goals or purposes or needs which are set in the following order of prepotency. First, satisfaction or gratification of body needs ••• Second, the safety needs ••• Third, love, affection, warmth, acceptance, a place in the group. Fourth, desire for self-esteem, self-respect, self-confidence, for the feeling of strength or adequacy Fifth, self-actualization, self-fulfillment, self -expression, working out of one's own fundamental personality, the fulfillment of its potentialities, the use of its capacities, the tendency to be the most that one is capable of being. In addition, the in~vidual will tend to want and to strive for all the conditions which make these satisfactions possible, e.g., freedom, full information, justice, order, etc." [2]

In his original article, Maslow proposed two separate hierarchies, the [[[Hierarchy of Basic Needs]] and the Hierarchy of Cognitive Needs. 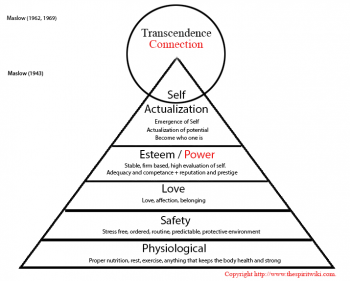 According to Maslow, human needs (even the need for love and self-esteem) are biological. As he noted, "If these needs are not fulfilled, pathology results" (Maslow, 1969, p. 3). On the other hand, when basic needs are fulfilled, then "...a different picture emerges. There are people who do feel loved and who are able to love, who do feel safe and secure and who do feel respected and who do have self-respect. If you study these people and ask what motivates them, you find yourself in another realm. This realm is what I have to call transhumanistic, meaning that which motivates, gratifies, and activates the fortunate, developed, self-actualizing person. These people are motivated by something beyond the basic needs." (Maslow, 1969, p. 3).

Prepotency: "Degrees of relative satisjaction.-So far, our theoretical discussion may have given the impression that these five sets of needs are somehow in a step-wise, ali-or-none relatio:nships to each other. We have spoken in such terms as the following: "Oone need is satisfied, then another emerges." This statement might give the false impression that a need must be satisfied 100 per cent before the next need emerges. In actual fact, most members of our society who are normal, are partially satisfied in all their basic needs and partially unsatisfied in all their basic needs at the same time. A more realistic description of the hierarchy would be in terms of decreasing percentages of satisfaction as we go up the hierarchy of prepotency. For instance, if I may assign arbitrary figures for the sake of illustration, it is as if the average citizen is satisfied perhaps 85 per cent in his physiological needs, 70 per cent in his safety needs, so per cent in his love needs, 40 per cent in his self-esteem needs, and IO per· cent in his selfactualization needs.(Maslow, 1943, pp. 388-9)"

Psychopathology: Maslow repeated often the importance of satisfying all human needs. Maslow said that the health, happiness, and well being of the individual physical unit were predicated on proper satisfaction of these needs. Failure to satisfy the needs of the physical unit led to ill health, neurosis, even psychosis, and even psychopath. As he notes, "The so-called 'psychopathic personality' is another example of permanent loss of the love needs. These are people who, according to the best data available (9), have been starved for love in the earliest months of their lives and have simply lost forever the desire and the ability to give and to receive affection". (Maslow, 1943, p. 386). A considerable amount of space is given in Maslow's 1943 paper to outlining the roots of psychopathology in the subversion of human needs.

Lightning Path: Concepts in red are Lightning Path reconceptualizations. The need for (self) esteem is reconceptualized as the need for power and efficacy (i.e. control) of one's personal world. Observation of children supports this. A child's evaluation of self, and their sense of reputation and prestige, is predicated on their mastery of the environment, and the parental and social feedback they receive. Children are driven (by the biological imperatives of their physical unit, and the wishes and desires of their Resident Monadic Consciousnessto become masterful at something that is important to them. Whether they are powerful depends on their eventual ability to master the world. Whether they feel powerful depends on the social feedback they receive.

Prepotent? Maslow suggested needs were prepotent, meaning that lower needs had to be satisfied before higher needs came into play. Many subsequent authors have assumed a ridged prepotency, but in fact Maslow had a flexible and probabilistic understanding of how needs emerge and were satisfied. In other words, Maslow recognized there was variation in the way needs were satisfied, and that the hierarchy was not ridged and fixed but flexible and flud (Maslow, 1943: 386-89).

In addition to basic needs and cognitive needs, Maslow proposed a third hierarchy of needs known as Meta needs (also known as growth needs) (Maslow, 1967) . According to Maslow these needs typically only emerged after the basic needs of the organism where met, and as an individual began to self-actualize and finally transcended. People motivated by metaneeds where motivated by truth, beauty, justice, goodness, neatness, efficiency, love, honestly, innocence, orderliness, growth, authenticity, serenity, peacefulness and so on (Maslow,1967: 101). Maslow believed that metaneeds were rooted in the biological apparatus of the organism (Maslow, 1967).

On the LP we fold metaneeds into the need for Alignment and Connection, two of the Seven Essential Needs.