Freemasonry is an amoral, secretive, hierarchical, patriarchal[1], authoritarian, and elitist Western Connection Framework developed during the late 18th century as a response to the ideological problems caused by the transition from Feudalism to Capitalism[2]. Freemasonry offered old elites (i.e. the landed nobility and high status priests) and new elites (merchants and emerging capitalist) neutral territory where they could meet, socialize, form networks and connection, explore, develop, and disseminate new ideologies.[3]

Freemasons use words and images that clearly indicate a concern with connection, ascension, and union. Just do an online image search for “masonic tracing board” and you will see ladders of ascent to starry realms of higher awareness and consciousness. As one mason says, “...we must climb the steps to achieve a type of gnosis which comes with the achievement of...an inseparable union.[4]

In Masonic nomenclature, Freemasonry purports to offer an evolutionary technology of regeneration[5] that raises its initiates from the Fourth Kingdom, a kingdom of "human consciousness"[6] to a transcendent Fifth Kingdom where the individual may become affiliated with the Blazing Star. "The goal of all mystical attainment, whether in Masonry or elsewhere, is the union of the human with the divine consciousness." [7]

The process ostensibly involves uncompromising repression of one's "human" faculties. The process, which masons call the Secret Science of Initiation or Secret Science of Mystical Death is symbolized as death and resurrection, i.e. death of the human level/kingdom and the emergence of the trans-human.

...every kingdom is self-contained. It is shut off, as though by closed bulkheads, and no leap from a lower to a higher kingdom is possible save on one condition - a previous death to the kingdom below.[8]

Initiates who successfully enter the Fifth Kingdom purportedly develop Powers or Siddhi. Greater perception, greater wisdom, and "magical" faculties like mind reading emerge as they advance up the steps and through the degrees. "Your new skills may appear miraculous and uncanny to others. but it is a fact of our Masonic Science that new consciousness gives rise to new faculties."[9]

Masonic teachings purport to offer a technology of Reconnection with Consciousness or the Blazing Star as they refer to it, but in fact masonic teaching co-opt and corrupt the Reconnection process by rigidly controlling the Initiates awakening experiences, and by imposing carefully constructed interpretations on key spiritual concepts. The controlled experiences and imposed concepts create a rubric that supports, in the name of Spirit, hierarchy, privilege, power, control, and a violent and degrading status quo. 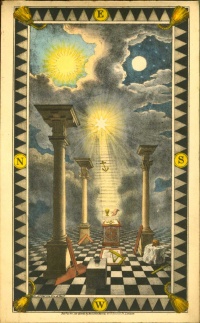 Goal of freemasonary is development of Masonic Sun. Masonic Sun is soul, undeveloped, and in need of learning and development. Point is to develop to a a point Masonic Sun where can "affiliate" or become reconnected with Blazing Star. Goal is accomplished by building the decidedly christian the Masonic Sun of our higher self. "Whatever we do, or think, with our physical body effects changes to our spirit. We can strengthen or weaken it, clarify or cloud it. Freemasonry teaches us that we should work towards a state where all our thoughts, words and actions may ascend pure and unpolluted into our spirit....Freemasonry likens this work to the job of erecting King Solomon's Temple....The aim is to build a perfect structure, of which every part is properly prepared and ready to fit in with the rest....King Solomon's Temple is a metaphor for the human spirit. It is the superstructure every Mason is engaged in raising....We must strive to ensure we contribute stones and timber of a quality and finish worthy of the Great Architect's design.[11]

Model below with Lightning Path equivalents

Decidedly Christian. Proving grounds. How are we proved?

Initial perception, recognition, awareness that there is something more. Nascent connection to consciousness. "Perceiving this spirit is the great goal of the Initiate." [12]

Masonic indoctrination begins as Masonic writers encourage potential initiates to see themselves as a "class above," or as a higher level of human with greater understanding, wisdom, and powers than the "average" humans below. As Lomas notes:

Non-initiates live from their gross senses. They live at their circumference using reason, cognition, and workaday intelligence. Initiates have a revolutionary inward experience that transforms their consciousness. it is one thing to be the top of one's class, but quite another to be move to a higher class altogether.[13]

What is the difference between a Masonic Initiate and a religious one? To initiates it is given to understand, via the hidden mysteries of nature and science, the mystery of the center. To the uninitiated all these things are veiled in allegory. The religious Initiate takes these things as matters of blind faith and book teaching, and so fails to experience the force of their Truth. The Masonic Initiate learns spiritual knowledge as a practical living science, and experiences an exact understanding of truts of which the non-initiate has but shadowy notions.[14]

Masons ideology dictates submission to authority. Masons are told that they cannot achieve progress forward alone but must submit themselves to the tutelage of some "expert teacher."

You can think of nothing terrestrial without being compelled to recognize the existence of its complementary opposite. Light and darkness; good and evil; right and left; birth and death; adversity and prosperity; male and female; pleasure and pain. These are the dualisms inherent in the physical world of which we are a part. Experience of these opposites is essential for human growth. Our existence consists of perpetual movement, like chessmen, from a white square to a black and from a black to a white. These moves continually test us and form our character; we grow as a result of our responses to both good and bad conditions. For how can we say that one class of experience is better or worse than the other? Each is necessary and each complementary.[15]

New brethren sometimes ask, "is it not our duty to keep to the white squares and avoid the black?' The answer is No. It is quite beyond your power to do so, for every good has the seed of evil in it, and every evil contains germs of good....It merely means that the joys and sorrows, the lights and shades of mundane existence must be accepted with equal thanks....When evil or sorrowful conditions dominate, they should be recognized as having the same educational value as their opposites[16]

To the Grand Geometrician of the Universe darkness and light are both alike and both good. So must you learn to recognize the equal worth of the blacks and whites....Whatever your lot at a given moment, whether darkness or light be your portion, around you is the skirtwork, the trust in the sacred law , and neither in ups or downs nor in life or death can you evade it or stray beyond its reach.[17]

The justificatory ideology symbolized in Checkerboard floor, something you see a lot of in the corporate dominated pop of modern music culture.

It is the same with our standards of conduct, our ethics. We label our actions good or bad, but the distinction is an arbitrary convention. The ideal of one age becomes a fault in the next....Our distinctions of good and bad, true and false, are nothing more than the personal or collective view of our society at that moement. To the clearer sight of the Initiate things are neither one nor the other, they are just facts of life needing no qualifying...[19]

The first task of a Candidate for Wisdom is to learn to rise above material dualism....You must become master of your lower nature and bodily tendencies. You must learn to stand mentally detached from the inevitable fluctuations of fortune and emotions...and to regard the ups and downs, the whites and blacks, of life as of equal formative value to you.[20]

In all periods of the world's history, and in every part of the globe, secret orders and societies have existed outside the limits of the official churches for the purpose of teaching what are called "the Mysteries": for imparting to suitable and prepared minds certain truths of human life, certain instructions about divine things, about the things that belong to our peace, about human nature and human destiny, which it was undesirable to publish to the multitude who would but profane those teachings and apply the esoteric knowledge that was communicated to perverse and perhaps to disastrous ends.[21]