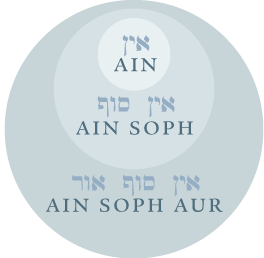 Ain Soph Aur is a term used in Jewish Kabbalah to summarize the manifested universe as it emanates from Consciousness. The term reflects The Unfolding of Creation as demarcated along three key creative conditions.

Ain → The Fabric of Consciousness in its original state of "I"-less/ego-less bliss.

Ain Soph Aur → The Fabric of Consciousness as it exists in during the perpetual and eternal emanation/unfolding of Physical Creation.

An attempt by Jesus Christ to describe Ain Soph Aur to his disciplines is recounted in the gnostic gospel, The Sophia of Jesus Christ.

The two-volume Secret Doctrine is also an attempt to describe Ain Soph Aur, though it is run through with corrupting elite ideologies.

Caution. This article/definition is in draft form and at this time may constitute no more than rough notes, reminders for required content, or absolutely nothing at all. Content is subject to revision.