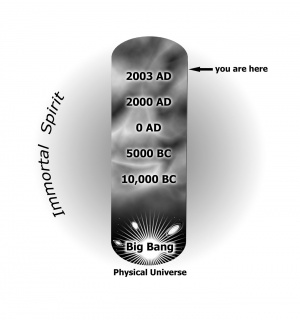 Space Time Tube from The Book of Life

The Space-Time Tube (or just "The Tube") for short, is the term coined by Michael to define and illustrate the Physical Universe. The term, first introduced in The Book of Life: Ascension and the Divine World Order and accompanied by an illustration, links space and time into an eternal four dimensional unfolding, driven by Imagination and Intent and that exists for the sole purpose of solving the Problem of Ennui and providing a playground for Immortal Spirit.

Our understanding of the nature of The Tube is condition by our location, and hence our perspective, in Creation. From the perspective of a Monad incarnated in a body, The Tube appears to move away in all directions (i.e. up, down, left, right, future, past). In Reality, and from the perspective of Immortal Spirit outside The Tube, The Tube exists only as a collective set of Archetypes and ideas in the mind of God. Since ideas have no Physical Dimensions, the archetypes and ideas in the Mind of God may be represented as a dot (ideas in Consciousness within a circle (the emanating Physical Universe.

As above in consciousness, so below in_matter

→ Day Three | Expansion | Music of the Spheres | Suns of God