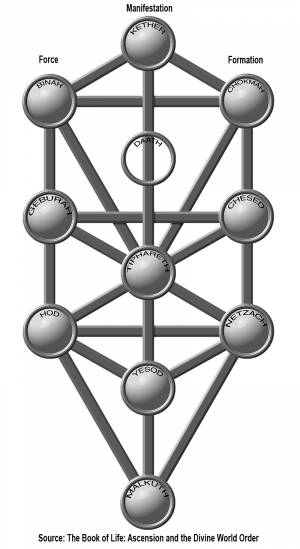 As noted in The Book of Life (Sosteric, BOLIFE), the process of creation is a process of Force and Formation. Energy emerges from Consciousness and is used to manifest through an integrated and balanced duality of “positive” force and “negative”. The Tree of Life is a Kabbalistic representation of the creative process that underlies and drives Creation. The Tree of Life represents creation as an "emanation" of Ain Soph Aur that starts at the Sephirot Kether (sometimes referred to as “crown”) and proceeds down through Four Worlds in increasingly "condensed" (tzimtzum) form until the physical world finally emerges in Malkuth (or "Kingdom"). This Tree of Life is a simple visualization of the “staged” process of Creation.

The Tree of Life primarily demonstrates the process of Creation as the interplay of Force and Formation. Various perspectives on the Tree may be taken. Force may be seen as emerging in Kether (crown) and then descending between a left Pillar of Force and a right Pillar of Formation with the middle pillar being the Pillar of Manifestation. Alternatively, force could be seen as being applied directly down the Pillar of Manifestation with the left and right poles both considered the Pillars of Force. Finally, you could even see all the sephira as being formative with force being applied like a lightning strike that follows a “Lightning Path” down the entire encompass of the Tree. All representations listed above are acceptable so long as the ideas of Force and Formation (Yang and Yin) are retained at center.

Compare the Kabbalistic Tree of Life with the Lightning Path's Tree of Lights represented on the cover of Volume One of The Book of Light.