As defined and developed by Psychologist Sigmund Freud, the psychoanalytic theory of personality is a dynamic relationship among three components of the mind which balance bodily energies to achieve a healthy existence of the physical unit. If there are conflicting interactions among the mechanisms, neurotic and psychotic disturbances are created. The conflict is best described as a struggle between the “ethical self” and the “primitive self”, respectively the ego and the id (Freud & Brill (Ed.)., 1966, p. 12). The third component is the superego which functions as the moral agent.

Id: According to Freud (1958), the id is the “obscure inaccessible part of our personality” (p. 77). It is considered the oldest mental component and has not progressed in development. The id is best described as chaotic and impulsive and based on the pleasure principle. The pleasure principle pursues pleasure and avoids pain. Sexual drives and instincts are at the very pinnacle of the id’s goals. Morals, beliefs, goodness, and even evil are non-existent to the knowledge of the primitive id. In sum, the id is sexual energy (sacral chakra) fueled to seek sexual pleasure but most of the time attempts are “sublimated” and “repressed” (1958, p. 625). The id’s energy is derived from sources directly of “somatic processes” (1958, p. 78).

Ego: In an attempt to deal with anxiety brought by the id’s repression of impulses, the ego developed from the id. The balancing of “bodily needs on one hand and motor activity on the other” require mediation by an organization called the ego (1958, p. 55). The ego has to balance demands of the id with what is best and most viable in reality. The desexualized energy of the ego allows for more control and mediation. The ego functions in relation to the reality principle to pursue a healthy state by means of postponing the need to satisfy impulses. The ego is in control of the demands placed by the innate instincts of the id, which is highly demanding. Demands made by the superego also cause anxiety and conflict.

Superego: The superego is simply our conscious. It is driven by authorities, parents, and other moral officials in society. Its main purpose is to ensure the “limitations of satisfactions” of the id (1958, p. 149) by placing judgment on the ego’s decisions (i.e., if ego reverts to transgression). In relation to the ego, the superego is “like a strict father with a child” (1958, p. 149) and punishment is served by submission to the superego. Representing traditional and innate influences of the past and hereditary are the only common factors among the superego and id. On the other hand, the ego is developed by personal experiences. 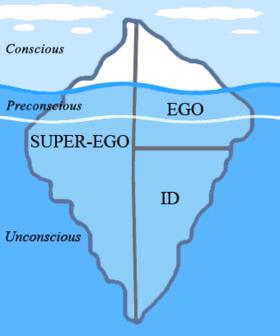 The "iceberg" metaphor is commonly used for comparing the states of conciousness with the three elements of the mind.