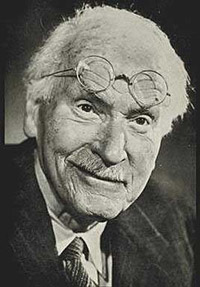 Carl Gustav Jung (born July 26, 1875) was a Swiss psychiatrist who has had an influential impact worldwide not only in psychology but many distinct humanistic fields and self-exploration studies. His main focus was on exploring the unconscious psyche through dreams, archetypes, art, philosophy and religion. As the founder of analytic psychology, Jung’s work has been forefront in guiding thought and perspective in discovering the unconscious realm for therapy.

At the age of 12, Jung began spending a large period of time away from school as he preferred solitude in nature (see note 1). Jung, also in his 12th year, would frequently experience evil delusions that would torment him. In gratifying these thoughts by turning to religious means he instantly experienced peace and strengthening. He felt that this experience was a direct relation to a divine source. Jung referenced all important events of his childhood to be sent by god, especially his dreams.

In 1895, Jung began studying medicine at Basel University. Compared to most students he was extremely poor usually having to rely on his father to obtain funding. Once Jung immersed his self in his studies, he was a successful student and became more objective towards studying unconscious experiences, ultimately by converging spiritual and physical matters. In his monogram, Synchronicity: An actual Connecting Principle, Jung’s focus was explaining spiritualistic phenomena from a scientific perspective. Jung described his own personality as having two dimensions: Number 1 stood for the conscious and Number 2 for the unconscious. He also paralleled the two personalities to a symbolic “mother nature” and “heavenly father”, respectively a spiritual and religious dichotomy (Jung, 1966, p. 123). His interest in this spectrum would be a lifelong journey.

Soon after graduating Jung worked at the Burghölzli clinic which was recognized as poor financially but where staff had the discretion to direct and advance their own counseling processes. Jung’s therapy structure had two elements. First, psychological tests assisted in diagnosing disorders. Second, Jung would explore and analyze eccentric thoughts of the unconscious that science was not capable of explaining. As he continued to explore misconstrued elements of his patient’s psyche, his intuition grew more developed, stronger, and accurate. He termed this practice the “synthetic method” where he would find common ground in sorting out unpleasant thoughts through assertive examination of the patient’s unconscious. Jung was highly caring, respectful, genuine, and empathetic to his clients, which resulted in great success and has paved a solid ethical structure for psychologists today.

A large portion of Jung’s career was devoted to psychoanalytic movement by serving the International Psychoanalytical Association as president for four years. In this period, Jung’s interest focused on psychological disorders; his belief was that archaic thoughts, if not confronted, pushed the person over the edge of sanity. On the other hand, archaic elements can also serve as creative energy of the psyche in healthy conditions. He regarded archaic thoughts capable of using negative or positive energy as they were in relation with spiritual or religious enlightenment.

Due to different religious and sexual standpoints between Jung and prominent psychoanalysts (see note 2), Jung soon drifted from psychoanalysis. After publishing Psychology of the Unconscious (originally Wandlungen und Symbole des Libido, 1912), his colleagues abandoned Jung in the belief he had transformed into a practicing mystic and his book was not worthy of credit from a psychoanalytic stance. Jung continued to delve into studying the significance of dreams, fantasies, and spiritual experiences. He then began to question if his inner feelings were the same as other men earlier in history. Although it was essential to examine a client’s personal history, Jung also found it critical to study history in general to wholly understand the root of the disorder. As such, he was attempting to discover the historical originals of inner feelings and create linkages among humans during any given point in history. He realized his visions had more than just personal meaning and could be describing universal cultural archetypes.

Jung defined archetypes as universal symbols used to represent universal unconscious feelings and experiences. Jung further elaborated that archetypes can be explored through the psyche (dreams, fantasies, etc.) and are portrayed in art, literature, philosophy, religion, and mythology. Soon he would paint pictures to portray the archetypes from his dreams. This is parallel to the idea that emotions can be studied objectively and scientifically. He would name the recurring images and speak to them when awake as he found it necessary to evoke and nourish the discovery process.

Later in his career, Jung travelled a great deal to give lectures in many countries. In his old age he would sometimes feel no one valued his life’s work but nonetheless was satisfied with the professional and personal accomplishments of his life. Jung passed away at age 85 leaving a legacy combining mystic elements and cultural myths to explain the human psyche.

Note 1: Jung, early in his childhood, disliked and was constantly bored at school. One day in his 12th year, Jung hit his head on the pavement and began experiencing fainting attacks. At Jung’s request, his parents would allow immediate exemption from school. However, one day Jung overhead his father’s fear of his son’s frail future due to his weak health. Immediately Jung fought and cured his attacks. His motivation toppled and he would get up at five a.m. to study for his classes.

Note 2: While many psychologists in the Freudian era viewed sexual yearning for the mother as the Oedipus Complex, Jung viewed a child’s desire for his mother as a necessary requirement to return to the womb (see perinatal matrices) in order to experience rebirth. Reliving perinatal experiences, as proven by LSD experiments conducted by Stanislav Grof, allows the individual to alleviate any past trauma experienced while in the womb and also begin a new spiritual journey.