Difference between revisions of "The Fool"

The Fool is an Old Energy Archetype from the Masonic Tarot Deck. In the Book of Slavery and Book of Power, the archetype is used to reinforce the idea that we are all fools in a cosmic school here to learn our lessons and follow the rules so we can be rewarded in one way or another. 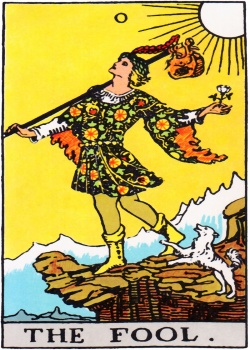 Wirth provides an arrogant description of the fool as a "toy of occult powers," someone who is "easily influenced and it "incapable of resisting outside influences." "Subject to domination", with no free will. A slave[2]. This person "does not count because of his lack of intellectual and moral existence."[3]