Difference between revisions of "The Empress" 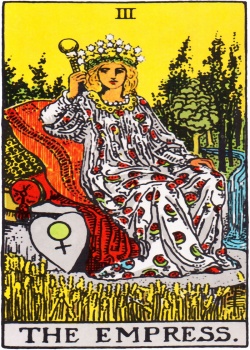 Wirth, and others[1] [2] also associate the card with a stereotypical representation of female gender: Grace, charm, rule through gentleness, vanity, frivolity, seduction, fertility, the family, etc.

"Where Isis is the Cosmic Mother, associated with the moon and with divine secrets, this is De­ meter, the Earth Mother, symbolizing the nourishing fruitfulness and thousand delights of earth. She is all-loving, radiant, universal female­ ness. In the Aquarian deck she becomes the Feeler, who stands with anus stretched out to embrace, her golden hair encircling naked breasts. She is called “prime mover,” and it is indeed emotions that stimulate us to movement and activity. The Sign of Cancer, a watery, emotional, maternal sign, is over her head linking her back again to the moon goddess, sea mother."[3]

In Tarot of the Magicians, Wirth emphasizes the initiaton that occurs after a candidate has assimiliated "the pure idea."[4] IOW, fall in line if you want to go any further.

BOS: GENDER STEREOTYPES: Oswald Wirth associates the Masonic Empress card with form, ideas, and archetypes, i.e. "...ideal forms or pure ideas according to which everything is created." As he notes, "This sovereign, dazzling with light represents 'Creative Intelligence', the mother of form, pictures, and ideas." [5]. Note the inappropriate and sexist association of form/formation with the female gender.

"As stated in the previous chapter the Empress represents the more accessible, more benign aspects of the female archetype. She is motherhood, love, gentleness. At the same time she signifies sexu­ality, emotion and the female as mistress."[6]

"The symbolism of the Waite-Smith Empress reflects the idea of nature, with all its force and glory. The Empress herself, voluptuous and sensual, suggests passion."[7]

"...the Empress represents a time of passion, a period when we approach life through feelings and pleasure rather than thought. "[8]