Difference between revisions of "The Wheel of Fortune" 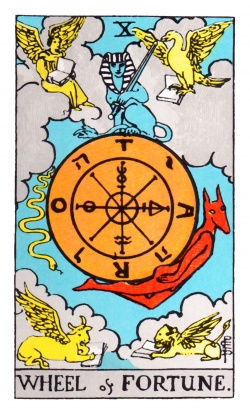 Excuse and justification: "In Thomas Malory's version of the King Arthur story we find the suggestion that the Wheel symbolizes the random turnings of 'luck'. Why do some people get rich and others poor? Why should a powerful king fall, and a formerly weak one rise to power? Who, or what, controls the turning wheel of life? Malory suggests that luck, seemingly meaningless ups and downs, is in reality fate; that is, the destiny God has chosen for each individual, based on reasons only God can understand." [3] Things happen because of spirit, but for reasons we do not always understand.

Judge and Punish: "The ever-turning Wheel of Life came to signify the laws of karma, leading you to reincarnate in one body after another. Now, karma is in a way simply another explanation for the mystery of fate. By the actions you take in one life, you build up a certain destiny for yourself in the next, so that if you commit a great many evil deeds you create in your immortal self a kind of psychic need for punishment. When the time comes for your next incarnation you inevitably choose a low caste or diseased body. (This simple psychological explanation of karma is perhaps based more on Buddhism than Hinduism.)[4]