Difference between revisions of "The Tower" 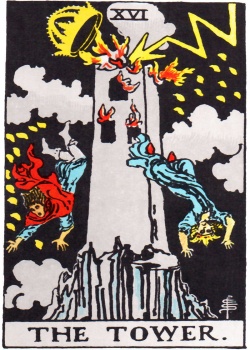 "In one sense this picture denotes the second stage of spiritual unfoldment, in which, by a series of sudden, fitful inspirations, the student perceives the illusive nature of his sense of personal separateness, and suffers thereby the destruction of his whole previous philosophy. And in yet another, although closely related aspect, the sixteenth Key depicts the overthrow of the folly of men by the wisdom of God." [3]